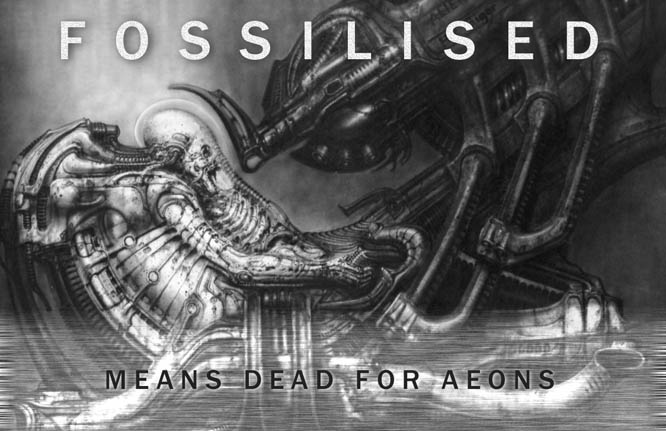 The Ganesha or Elephantine "space jockey" from Alien (1979) was described as FOSSILISED i.e. had been dead for aeons, while his egg-cargo remained in laser-protected stasis. He was embedded i.e. built into, grown into, an integral cog in the hyperspace telescope machine and he landed that 'derelict' pretty carefully on LV-426 back in the day. Tell that fucking story!


First of all: DAVE OFF...
you'all know the film Face Off starring Johnny Trav and Cagey, right... no it's not even connected to that. It's basically ALL THE EVIL-TWIN FIGHTS SCENES you've ever seen in a film already. Who will win? And do we really care? And (most importantly) will we be able to identify the victor come that really important time later on in the film when Real Trust might just become a narrative issue.

Secondly: SAIL FIXING...
sure, Gravity had its boring pointless self-absorbed moments, we all agree, but did Alien:Covenant (the film that's supposedly getting us to the answer to the long-awaited question, "Why did the Elephantine Space Trucker tidy-park his cargo-hauling space-croissant on LV426 in 1979?") really just spend upwards of half an hour fixing the solar sails of the Covenant space ship?

Did I really (as a cash-paying film-goer) need to see those lethargic golden sails open up like a view of the Giza Pyramid from above? Is it my role as a paying customer to sit through such Freemasonic dull symbolic trite?

Thirdly: PARADISE...
and by Paradise, I obviously mean 'the gloomy temple from long-ago ages' that David calls home. It was just all so gloomy, dank and despondent. Alien:Covenant is just dark, and by this I mean UNDERLIT in many of the scenes on the surface of Paradise (sic). Maybe it's a luminal-narrative trick - an illustration of David's personality - that he's come this low? This Lost....yeah, we get it, "Shelley is not Byron," and... damned narrative upgrades.

Alien was.
That was enough.
No need for Aliens' egg-laying Queen. Alien could already turn humans into facehugger pods by 'some sinister secretive process'. Everything since then has diminished and diluted the original biomechanoid concept of sexual nowness and transformation that Alien represented.

I was really waiting for the new-Xenomorph in the Covenant shower scene to somehow become like the invasive fingers-in-the-face in The Thing (1987). But more of a total-body Giger-moment where the man is quietly attacked from behind and the woman doesn't realise it's happened until 'much later in the biomech seduction  scene'.  The violent climatic PULLOUT would have been the couple's real 'undoing'.

I always thought the original Alien had the hellish property of being able to soften parts of itself like an Octopus to squeeze itself into those tight confines of the escape ship in the film's last reel.﻿


Usually, having watched a good film, I come out of the cinema buzzing or morbid or paranoid or excited... something. With Alien:Covenant I came out feeling nothing. Nothing. I was actually glad to be no longer watching this film. I was out of there as soon as the credits started to roll. Years of expectation I will never get back....
Email Post
Labels: film review