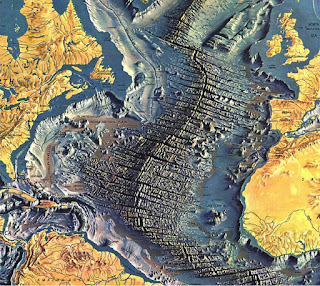 so, I was listening to this thing about Atlantis, I know, right, I shouldn't right? But then I started looking at the mid-Atlantic place where there's NOTHING. I mean, there's nothing apart from a wiggling north-to-south TRENCH which we all know i.e. suspect, has something to do with oceanic stretch. Right? Vulcanism? Plate tectonics? Right?

But look closer at the image, in fact look right at the drop-offs at the western USA and eastern EU edges. Such a drop-off of SEVERAL HUNDRED FEET. Doesn't this look familiar to anyone who's followed my blog before, namely Mars' electric universe-gouged Valles Marineris. Those blunt tributaries and the steepness of the scalloped edges?

Are we looking at a Solon-recorded ELECTRIC UNIVERSE or THUNDERBOLT OF THE GODS event some 9,000 years before Plato's 560 BC rewriting of the 'Death of Atlantis' when 'that great empire' was cruelly eradicated because it was an unlucky anchor point for a global plasmatic discharge into salty water?
Email Post
Labels: electric universe