STAR CITIZEN - HALF A BILLION DOLLARS - TEN YEARS AND COUNTING

Chris Roberts, that is. He's made a few well-respected games in his time. But he has time-management issues. Sure, he's a stickler for detail, like the badges on uniforms or the embossed detail on his ship skins but... can he do it? Can he get this hulking behemoth he's created out the door without a Controlling Interest Rebellion?

The answer is NO... nobody can, because (even after ten years and half a billion dollars spent) the dev-team or Chris himself haven't homed in on what the game actually is.

Is it a mainstream game or a niche game?

Is it a kids game or an adult game?

Is it even a serious space sim or more of a pew-pew arcade experience?

Good Design might offer the player (the illusion of) choice but good design is never about 'letting the player decide what game he wants to play'. There's literally no way you can 'make a universe' that caters to all the rubs of the genre and its offshoots, and the various playstyles of the backers. You have to decide, for the player/backer, what his/her universe looks like, plays like.

You'll notice I've opted for a centre-screen UI-free hand-driven player experience... all currently missing from the most recent release, after ten years of development.

SHIP: it's 2953 soon... your ship should be able to ID you, from your mobiGlas? As you approach, the ship should a) greet you and b) prep itself for take-off. When ship takes off, it should be thrust-based so that it has to overcome its own mass and laden before even lifting off from the ground, only aerodynamic design should limit speed in air. In Newtonian Space, a ship should never be limited in speed, only fuel dictates lack of thrust. Centre-screen targeting also applies to the driver of a vehicle, he/she looks at the garage door with his vehicle sensors and he doesn't have to leave his seat.

PLAYER: centre-screen targeting... which the game used to have, is the real player-driving experience. Basically, whether you look at a thing with your eyes or targting a thing with your ship sensors, and it's in reach, then your hand comes out or your target is magnified using solid hologram tech. You look at it, it resolves. Solid holograms: they're in-game but only as set-dressing, when they could be used to drive the mobiGlas interface and integrate that interface into the pilot's cockpit - ya know, mobiDocking.

HAND: this is the big one... imagine a first-person experience WITHOUT YOUR HAND COMING OUT to o the stuff and fiddle with the gadgets. This, for me, is the ultimate oversight/design gaff. You should be able to walk up to something and (when you're in arms' reach) your hand should come out and be ready to 'do something' to the item in centre-screen. Mouse click is all you should be asked to do to 'get something in your hand' or 'press a button or flick a switch'. Simple view-accurate gaming, even for a pilot sat in his cockpit. 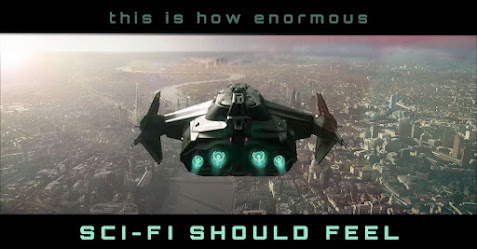