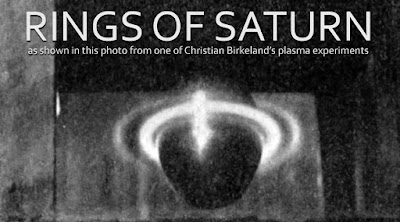 My most recent examination The Rotating Plasmoid was the thought that the HC Unit itself, this little thing I had alternately showing a positive then negative charge face to the universe in this cycle + O - O, is a tiny electrical pinch effect that when scaled up produces something like supernova 1987a. I put supernova in italics because that's not what it is at all.

The HC Unit started out as a single hydrogen atom but it might be a little more complicated based on the stable plasma numbers and the fact that they tend to make atoms in groups of three... makes me feel that the actual 'size' of a HC Unit is probably more likely to relate to the function of the 3-quarks that make up a barion rather than the hydrogen atom itself.

Anyway, these little regularly pulsing HC Units (I still don't know what the periodicity is or whether it changes as these things ring-up to make atoms) feed each other electrically making the charge radicals like O2 and C4 whereas for the Noble Gases there is no such net charged, a CLOSED RING of pulsing charge difference. Noble gas elements like Neon, Argon, Xenon, Krypton bond electrically with no other element.

So, here in the pinch zone of an atom is where a ring can form.

Kinda came to this conclusion looking at the rings of Saturn and the work done by Christian Birkeland and his electric plasma ball experiments at the turn of the last century, illo above. Saturn's ice debris forms a relatively flat plane or disc... something you'd expect if two birkeland currents had been pinched into the position of where the central gas giant is forming i.e. constantly forming i.e.i.e. still forming today, thank you Sun.
Email Post
Labels: hc unit