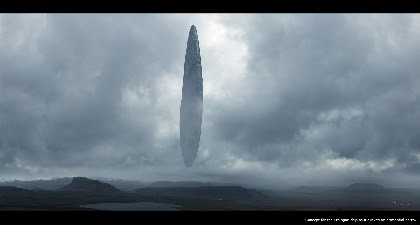 woah, that thing there, the dark upstanding lozenge (or seed-shaped) ship from the opening of Ridley Scott's 2012 Prometheus film, what's it doing (en masse) in the new ARRIVAL film?  Excellent and intriguing-looking trailer below:


DAYS LATER UPDATE: The Telegraph has already done a 5***** review of ARRIVAL which featured at this year's Venice FIlm Festival, they said,

The time to pull this stuff apart probably isn’t two months before Arrival’s UK release, so let’s just say the food for thought on offer here is Michelin-star-worthy. It turns an already beautiful, provocative allegory into the kind of science-fiction that can bump your whole worldview off balance. This is riveting, dizzying stuff from Villeneuve, and another early peak in a thunderously exciting year at the Venice Film Festival.