I've had a lot of contact, recently, with the physics-core of the Thunderbolts Project namely Wal Thornhill, and while I like/love his idea of an Electric Universe, I find Wal very difficult to get on with. I had the same personal reaction to the Growing Earth theorist Neal Adams. But this is probably my own fault, I do tend to 'rub people up the wrong way' as a rule...

People like Wal, and Neal (and maybe myself) are dogged arguers, relentless corner fighters, convinced evidentialists... and that's not a really bad thing. What the RSC or Real Scientific Community needs is more people who will go out and ask seriously dirty and dangerous fundamental questions and argue their contention with as much dogmatic confidence nee arrogance as such characters naturally muster.

We don't need to like these dogmatic characters, we just need to 'let them get on with it' and show us how our universe really works... without personal prejudice.


FREE PLANET RANTORIAL: I'm not such a big fan of Wal's insistence of the positive and negative charged elements, as separate entities within themselves.

My 1985-scribed Hertzan Chimera Unit (sub-atomic particle chaining mechanism) had the negative and the positive of Wal's (ironically traditional) electron/proton pairs BUILT INTO the way it manipulates Universal Equilibrium across the vastness of space. Light actually travels backwards towards the debt-settling focus, in the HC Unit universe, all photons are universe-sized.

Here's how the HC Unit is represented, in graphical format, showing any atom's assumed-physicality as a function of its CLOCKWISE or ANTI-CLOCKWISE excess of the 'the entire universe' at one arbitrary point in space. This is what I call an Hertzan Chimera Unit. This place where 'the entire universe' deals with the debts and costs of 'a universe in flux'. HC Unit excesses can pop up anywhere/anytime in the universe, and unless they are trapped into atomic ring systems, they'll disappear once UE has settled the excess-debt.

For the same HC Unit, the CW and CCW excess can open up any distance across the universe... 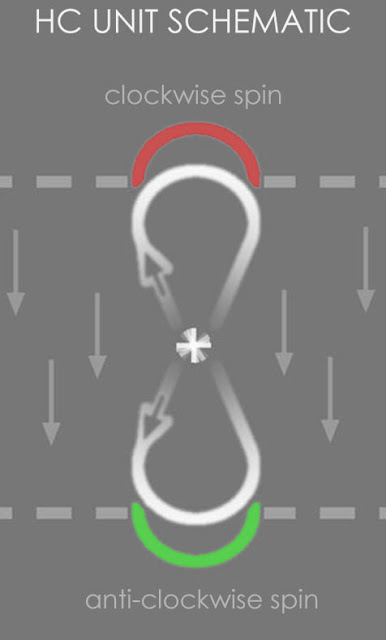