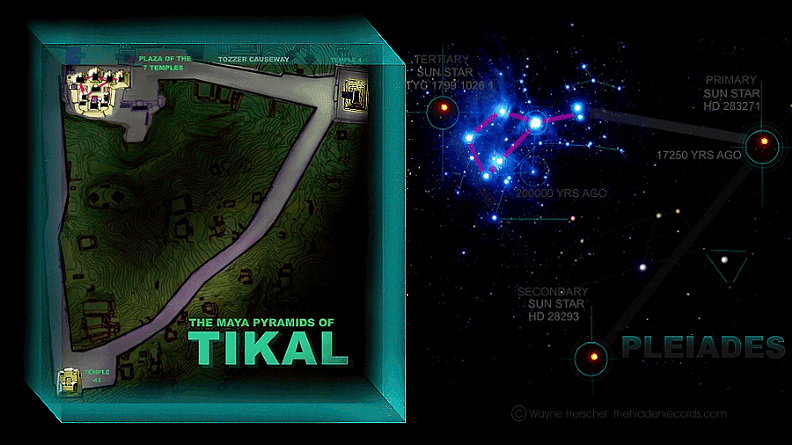 author of The Hidden Records, Wayne Herschel has found The Planet of Our Ancient Alien Ancestors, and knows where it was positioned in the sky 17,250 years ago.
Wayne has some strange thoughts about our Ancient Ancestors and I kinda-quote "Once Humanity finds the planet of this 'one god' all religious wars will end."
Seriously?

We all know WAR isn't about God. Even if it's a claimed Holy War or Crusade or Jihad. War is generally more to do with THE GAME of Ownership and Leadership and Indoctrination. Wars will happen even without God, it's like hyenas fighting over a piece of meat in lean times. But an invented God-figure is a GREAT EXCUSE for righteous action at home and abroad, eh?

Until we adopt a Free Planet mentality where we are the Custodians of our home world in a DO RIGHT BY fashion, wars or possession and me me me will always happen.

Question: won't knowing which planet our Ancient Alien Ancestors departed from Last Migration, mean a) we might never find them, if they're no longer based there and b) they might have planted us here 'as food' or 'as clothing' for them, which is bad news for us if they do return and c) we might only find A NEW ENEMY if we were to 'meet and greet' these Ancient Alien Ancestors.
Hell, we could have been seeded or 'placed' here all those hundreds of thousands of years ago by such Ancient Alien Ancestors to CLEAR THE PLACE or make sure all Natural Life was eradicated, concreted over - and it has to be said that we've done a fantastic job.
Finally, that ancient gold Mayan spaceship item in video one looks like an organic 'flying fish' version of The Human Penis i.e. a Fertility Symbol, not a Space Ship.

I wanted to add one more observation about The Giants of Our Past.

This might be more an interpretive error on the part of 'researchers' and 'oral traditionists'. You notice how I've CAPITALISED certain words of phrases in this report, right? Used a large font, for emphasis. Remember that most VICTORY SCENES or steli carved into ancient monuments show the Victor as a Giant or Totem persona, slaying his foes. It's not about The Army, it's about the Deity or God or King doing the slaying. Maybe THIS is where the idea of ancient Giant space-farers came from, this wrong-reading of ancient tablets of human corruption over 'one's enemies'. Only the EGO was statuesque, not the race.

And that's sad, extremely apt.
WAYNE HERSCHEL RESPONDS: I contacted Wayne this morning and asked his opinion of my most recent blogpost about his work, his research. Here's what he came back with:

Wars today are creations of the richest billionaires on the planet that own governments and fabricate lies based on two lies that monarchy systems have nurtured as hidden records since the beginning of time in favour of chaos and differences:

They held hidden records of our human origins both spiritual and physical: Physically all race and creed are all equal if our ancestors came from the same place, Spiritually our souls all come from the same place of consciousness if the reality of the Cosmic Tree of Life records appear to be true as I claim at Oneism.org.

In simplicity this dual truth IF known would end ALL religious differences and end ALL race differences if it were known as fact. All races appear to originate from the same cosmic bloodline ancestors and all souls from the same spiritual genesis according to these hidden records.