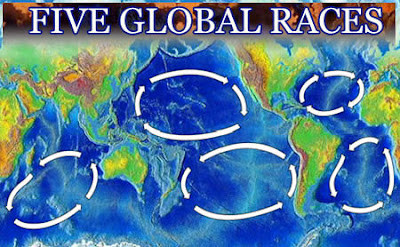 one would imagine that, if certain races were able to make ocean-going boats of reeds or wood or combinations of twigs and tarred leather, these certain races would have spread genetically along the periphery of the territories defined by the geographical limitations of the Global Trade Winds.

You only have to look at the global preponderance of astronomically aligned stone circles and pyramids, 200-tonne-stone polygonal-wall construction and certain artificial cradle-boarded or giant-natural elongated-skull  findings to know that global trade or global rulership or global doctrine (as a tradable fashion item) has existed since the very start of the Age of Man. Sure, some migrations, certainly most tribal migrations, will have happened via connected land masses but that doesn't get a Peruvian pyramid all the way from Egypt. Some concerted trade wind activity is surely shown via this global synchronicity of artefact.

I've not done anything like the research I should have done before posting this, it's just a hunch based on the very human trait of, "Oh, it's there, and I've got a boat," a fascinating glint on the maritime horizon.

Sarah Beth said…
Is this the introduction to more work?
3:08 am