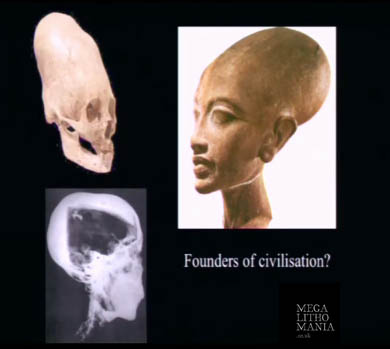 this presentation Alchemy, Shamen & the Secrets of Pharaohs (filmed at WCCSG Circles of Knowledge Conference, August 2011, Wiltshire, by Hugh Newman & Jonathan Adams of the Megalithomania UK website) given by Lucy Wyatt seems to parallel a number of the LOST ATLANTEAN CIVILISATION theories extolled by alternative researchers like Graham Hancock et al.

"Food is medicine," my favourite quote from the following video...


Regular readers of this blog will remember that these tall-headed Civilisers a.k.a. homo capensis, eventually made their way to the western edge of South America where their elongated skulls are the only remains that have been found of them, other than the legends of them arriving by sea in boats that glided like ghosts.

DISCONNECTED NOTES: it's looking like 'some form of high energy Tunguska-like air burst' was responsible for the ancient story of Soddom & Gomorrah. Additionally, a similar event seems to have been responsible for the end of the last ice age aka The Younger Dryas 12,000 years or so ago. All this lends weight to Alan Hassel's (evidence substantiated) claim that a similar cometal or asteroidal airburst in 562AD was responsible for allowing the repopulation of the UK from the east i.e. the Anglo-Saxon/pre-Vikings incursions into central Britain. Our country was ruined and uninhabitable for seven years after this event, if we're to believe the chroniclers of the Dark Ages.

We are living in a dangerous solar system and as soon as we start to understand that and prepare for it we can survive these events by adopting Free Planet survivalist techniques and Home Building, the more prepared we'll all be.
Email Post
Labels: ancient ancestors