Origins of the British - Wilson/ Blackett and Oppenheimer/Cunliffe - The British original sea-faring Khumry? 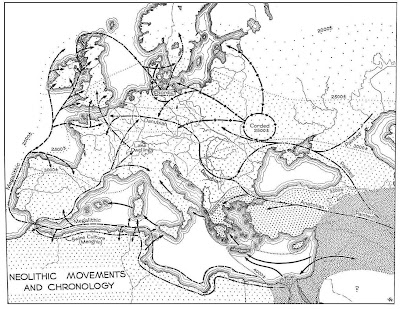 Examine the above map and notice that the missing-link British People known as the Khumry might have come via the mediterranean seaways to Britain, from Syria... this also ties in with genetic research on the 'fathers of the ancient british geneline' by researchers such as Stephen Oppenheimer and Barry Cunliffe.

The Khumry (Cymru means Welsh) are recorded in numerous historical documents in Latin, Greek and other languages as a sea-going race tracked from Syria or Egypt up the Atlantic trade route to Wales at least a 1,000 years before the birth of Christ.

There are well over 200 Khumric-inscribed stones in Wales and their ancient written language known as Coelbren can be used to translate documents from Ancient Egypt, through Ancient Etruria and Raetia up through Basque into Wales via either the rivers of southern France or the pillars of Hercules i.e. Portugal passing Gibraltar. Old Welsh (or Cymruic) seems to be the dictionary for translation of all these 'untransaltable' artefacts...


"Four hundred years of Roman Rule (in Britain) is a joke," we're being fed a load of old baloney.

INTRIGUING QUOTE: from later in the above presentation, "The 562 AD comet that devastated Bolivia was also responsible for the demise of the majority of the English nation, allowing the Anglo-Saxons to move in..." to a slowly-recovering east-middle England, wow.