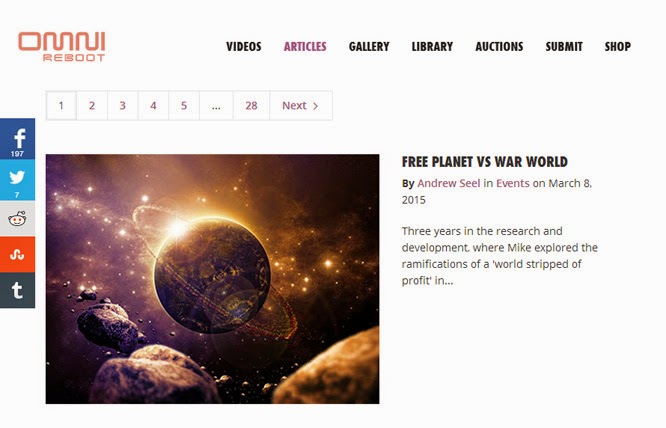 I was a big sci-fi nut as a teen and a big fan of the glossy, weighty OMNI magazine. Now, they're relaunched as OMNI-reboot and are featuring my Free Planet vs War World novel dual-trilogies.


That's how the new article on OMNI-reboot opens.


TREAT THEM MEAN - KEEP THEM KEEN - ABDUCTION FOR RANSOM?

I'm this close to tying up and completing the final parts of the dual 'Free Planet vs War World' trilogies and I'm thinking, "Should I just abduct the books and hold them for ransom until my death?"

Has an author ever done this before, held the release of his final books in a dual-trilogy so that he denies the reader the resolution the earlier books flirted with? I mean, don't get me wrong, this isn't a device to cover 'writer's block' or something. These final books in the series' Reaper (free planet #3) and Kumiko "war world #3) are as much as done, bar a bit of typing in then retyping then rechecking then rewriting again... smile emoticon

I mean, you know, instead of sucking up to the system all the time - should writers take a stand against their own illicit prostitution for profit? Are writers REALLY the cogs in the machinery of Corporate War? Or should they be saying 'something real'?

Will the resolutions of these books, of this dual trilogy, even be something the reader is waiting for? Can anything bring the Sheople out of their Consumerist stupor. And yes, I understand the irony of selling this material on the open market but life is like this, until Free Planet wins.

As the writer holds all the cards in his ING or Invented Narrative Game, is this how we should ALWAYS TREAT THE READER?
Email Post
Labels: press