Free Planet - KILL YOUR GODS - words from The Union

I had another nice long jog today, and a second back-and-forth session with The Union. I received a message, sure. But it was a dire message for mankind. It went something like this.

Short and straight to the point. That was The Union's stark response to the simple question, "What shall be done to the Human Race to save Free Planet from ultimate rot and ruin?"


I have no control over any of this, nor do I want it.

Suddenly, after intellectually pondering the insane repercussions of this statement for the final couple of miles of my jog, I realised what they were asking me, it was so simple. What is the thing that makes man do what he does? What is the driver of so much pain and sorrow on this Corporate Hell Hole? What is the thing we fund with our loyalty to the fantasy and the payment of our hard work. Hierarchy, or those who consider themselves better than you. Those who enslave you with their promises of Nirvana or Heaven or Paradise. I suddenly realised that you must take control from these ephemeral higher beings, you must... 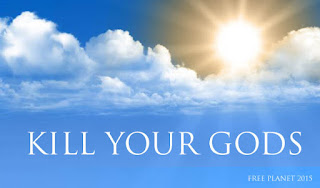 Yes, what ever denomination of 'your god' you've been trained to worship, fat is you have a crippling financial relationship with S3 or the System that Supports Such, and once you stop feeding that habit that hold over your life loses all its power. It's a win/win for You The People of Free Planet.
Email Post
Labels: free planet

LA said…
I had the same message come to me for the past couple of weeks. Not the same wording but the same principle and I feel free. My reasoning is we are born in this world alone, naked. No bibles, sutras, qurans, just us and we die alone. My example of life is mother earth live and breathe, forgive and restore that is my religion now. Do as the earth would do?
1:17 pm

Mike Philbin said…
Maybe it's time for us to ALL START LISTENING to the voice of The Union.