AUM - the glowing sound of - the ancient electric sky

Were we once occupants of a very different world rich in flora and fauna, fed by the all-year light spectrum inside the glowing plasma sheath of a brown-dwarf star i.e. proto-Saturn? 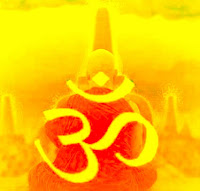 The sun (electrically) captured brown-dwarf proto-Saturn, effectively turning off its glowing plasma sheath, allowing the planets in its system (Earth, Mars and Venus) to fall out of its orbit.

Not before forming spectacular standing columns of glowing plasma that boiled down between Earth and Mars, forming grand canyons and totally symmetrical 'meteor collision' sites with edge craters and perfectly central peaks within their electric-machined inverse domes.

This before Dragon Venus broke off and raced in towards its current position nearer the sun, its new parent-adoptive star.


Think of the earliest human races who might have experienced such a horrific star-parent transition, the proto-indo-european-speaking people of the Indian sub-continent. Is ॐ THE ELECTRIC SOUND OF A PLASMA-TRANSITIONING SKY that early man might have witnessed and worshipped? As the plasma column from Mars poured down its glowing destruction upon Earth's northern regions, is ॐ what the charged thrumming horror of Global Apocalypse might have sounded like to early man?


Is ॐ the remnant-sound of Saturn-to-Sun parent-event Electric Destruction and the reason why blaring Brass War Horns were so prevalent in ancient times of ridiculous territorial battle for assets and land?

ADDITIONALLY: if you actually look at the 'om' symbol itself, it contains...


a) the view from Earth of plasma-ising Mars in the proto-Saturnian sky as Saturn is being kicked off in favour of the Sun - the upper dot with a crescent below it.

b) the curly dragonlike wispy view of Venus emerging from behind Mars as it tears past Earth - the lower part of the symbol.