I suspect that the 'atomic structure' of the larger-ring atoms is based on the arrangement of the previous 'nobel' atoms otherwise seen as four kinks in the HC12 chain i.e. Carbon would have a 'structural' or 'virtual'  +0-0  Helium at the core of its twelve with the eight remaining outer HCs-in-the-chain offering the valence of what we call four outer shell electrons in particle-speak. 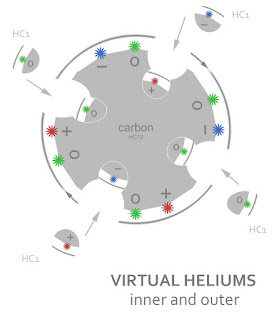 We make the 'virtual helium' in the HC12 chain by taking the first HC of each three-HCs in the twelve chain, this gives us the classical +o-o of Helium while retaining the cycle of the twelve HCs that line up to make the Carbon atom. Each of the remaining eight HCs in the chain is paired off as either a o- or a o+ standing out from the 'atom'. This allows a single HC valency to move into the gap left in the Carbon12 chain forming four new 'virtual helium'  +o-o  i.e. no net charge rings.

HC UNIT NOBEL GASES SCHEMATIC: here's a 2016 i.e. cleaner, version of my Nobel gas element solutions... remember, the 4, 20 and 36 HC units follow the  +o-o  cycle all around their relative atoms. No matter how many of them it takes. They're all (technically) 90 degrees out of synch with their neighbour and form ONE SINGLE CHAIN. 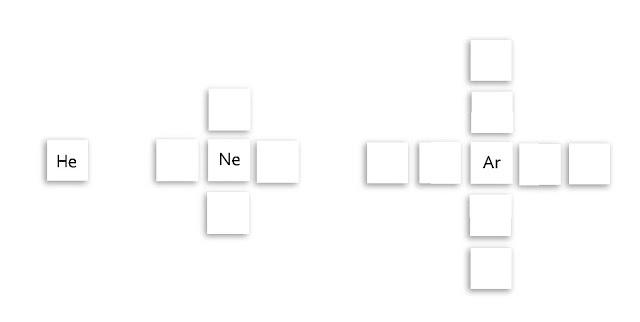 Yes, there is still a REAL QUESTION why the measured atomic masses of the larger and larger elements tend to exceed the 2xvalency of the earlier or lighter atoms. I still suspect this is due to some technical complication with the way atoms are WEIGHED using electromagnetic path-bending equipment. I think the 'extra weight' is a virtual error, for a system that doesn't take into account the higher electro-magnetic profile of these 'more massive' atoms.
Email Post
Labels: hc unit