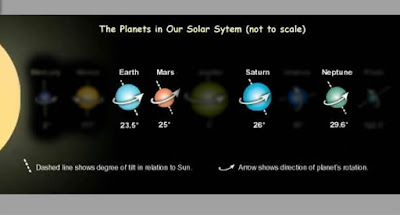 the image above shows the axial tilt angles of the planets in the (current) arrangement of the Solar System, from Mercury out to Pluto.

The EU or Electric Universe contends that brown-dwarf star proto-Saturn brought with it Mars and Earth and plasmatically spawned Venus as it entered the Solar System some 10-12,000 years ago.

But EU-theory doesn't mention Neptune... it's only three more degrees out than Saturn, and the angles of the proto-Saturnian planets are gradually increasing the further out you go. As if they could have once been within the same spin family or hierarchy or system.

So, where does Neptune fit into the Electric Universe model where proto-Saturn infests the Solar System with its family of electric sheep?

ADDITIONAL FOOTAGE of the Electric Universe: I'd never seen this before, footage of both Venus and Jupiter DISCHARGING into space... jump to 00:19:00.