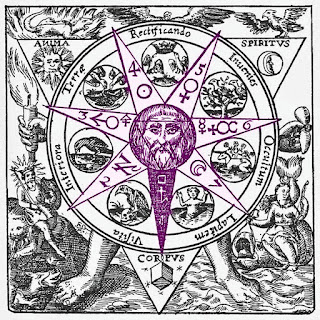 "Language is a virus," proclaimed performance artist Lauri Anderson in the 1980s.

In Arrival's case, the viral-language is the mostly-symbolic squid-ink circle-script of an octopus-like alien species that looks like smooth-Cthulhu pouring from the roiling mists of ancient Earth history. You're right, I used a lot of imagery there but Hollywood's Satan-worshipping prance is never that easily exorcised. Satan, how is that fair? Looking at the 'alchemical' image above, you'll see that it's an inverted seven-star. This is how the seven-fingered 'hands' of the seven-legged 'heptopods' are actually rendered in the film. Point downwards... now, that's a proper introduction to the Dark Arts.

The living black-embossed Ouroborus-like circular-vocabulary is emitted in groups of three, just like the Anima-Spiritus-Corpus of the above alchemical image. Were the twelve ships of the alien race to represent the twelve apostles of Christ, "We don't see him," and there's unsubtle suggestion in the film that 'seeing Christ' is a moment that can only take place once unity of belief has happened. Around the world. Once we're one, in trust and God. A new world order achieved...

Arrival is what happens when profit-cynical Hollywood (or the Great Mind Management Machine) gets hold of your little story, in this case Ted Chiang's original Story of your Life (which I have read online since writing this review, ed). The major themes explored by this award-winning novella are Determinism, Language, and The Sapir–Whorf Hypothesis where the 'understanding' of a language is said to alter the linguist's brain. The aliens in the film are a unique brand of octopus that has seven legs and walk like The Adams Family's hand-Thing.

But everybody knows an octopus has eight legs, so what's the seven-legged version doing in this film? The seven-legged Octopus refers to the Spectre that game theory's this planet on a daily basis, and it's becoming a more and more prevalent logo for companies around the world. Slavoj Zizek's new work Disparities has such a seven-legged Octopus on the cover. One never see the Eighth Arm of The Global Octopus, unless one has NTK or Need To Know. The free-masonic Statue of Liberty sports a seven-pointed crown. The seven-pointed star is also said to relate to a time in man's history when Mars and Venus played sky-ripping plasma games between Earth and proto-Saturn a.k.a. Satan.

There's a very interesting article on SlashFilm about Arrival's aum-chanting score, by Ridley Scott's new Blade Runner 2049 composer Johann Johannson, which features a link to the ultra-contrasty Max Richter piece On The Nature of Daylight that opens the film. Therefore, I like the tone of how this film starts. I like the ghostly portentous ending. Original material, sinister alchemical issues of the film's rendition and the causatory fourth-dimension aside, this film was pretty-much spot on.
Email Post
Labels: film