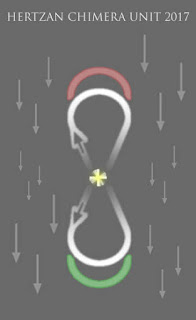 Seriously, this is how my pseudo-physics entity, the Hertzan Chimera Unit, came about. I was nineteen years old, and knew no better. The HC Unit was about the size of a hydrogen atom, and chains of HC Units ninety degrees out of cyclic phase formed all the atoms. Four HC Units form the no-net charge Helium atom. Twenty form Neon. Vertices show mass, unused edges show electron shell totals, in the images below. Soon after posting my 'crazy concept' on one of the academic alt.physics.new-theories groups, Dementia13 magazine published my article HC Unit and Death of Big Bang. 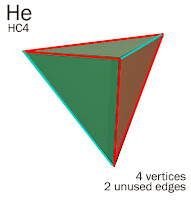 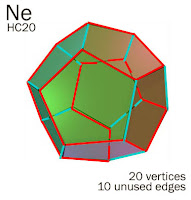 It wasn't even a waterfall. It was the over-spill of Carr Mill Dam reservoir in St Helens, Merseyside, where I was brought up. The HC Unit was sitting there, in the middle of the concrete off-ramp, as the water poured past it. The HC Unit was spinning the water through its open tubing, clockwise then anti-clockwise. Periodically, the water would spill over the top of the tubing and be syphoned through the second (red. green curving) traps above and below the HC Unit schematic at the top of this post.

I took this to mean, "You only SEE the HC Unit when it is excessing like this," when the water is spilling out into the secondary channel. Or rather, "The HC Units only see each other, in their excess configuration," in that this is the window in which they have a chance to form strings of HC Units that might become atoms. I think the 'structure of the HC Unit' delays time around the flow, increasing or decreasing it relative to the original flow. Three (open-ended chains of) HC Units appeared to be the best way that larger chains could link.

NOTE: in the electric universe, plasma has three modes - dark, glow and discharge. There might be a solution here for the 'darkness of Nobel matter' i.e. the non-radicality of the nobel gases, in that they're self-feeding. The open-loop CW or CCW excessing of the HC Unit is the universe spilling in to settle the glow-mode debt in the same way that the electrical charge pours into any star's heliosphere to 'fuel' the shine. HC Unit isn't an electric phenomenon, and I'm not sure if the Electric Universe is an 'electric' phenomenon either. Plasma, and its various modes, might just be a cause-effect of a fall-in physical universe that is even stranger than we can possibly perceive.

In my original version of the HC Unit, the flow of water past the pump relates to the twisting flow of charge-pairs through space. The HC Unit pump would push ether through its system at ninety degrees to the electric flow i.e. magnetism. Red, green excess is 'charge' but in a directional sense only, relative to the flow it's formed in. If planets, stars and galaxies form like glowing high-redshift string of pearls upon universal Birkeland Currents, why not atoms or HC Units?
Email Post
Labels: hc unit