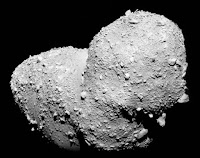 because I graze around the alternative fringe of Science all the time, I sometimes come across things I wouldn't normally have found if I was a simple researcher within my chosen field.

Case in point: THE STONE BALLS OF COSTA RICA.


But they're not. They're everywhere. All over the world. Some are small, there are lots of them. Some are the size of Olmec Heads, you know the ones, it's (probably) a found giant stone ball that's then been carved with African-esque features. And they're found in Peru. Yeah, weird.

But what are they?

All kinds of combinations of what we know as soil, when thus subjected to electrical stress, will produce these 'blueberries' or blobs of stone. You find some of them as double-lobe structures. And you can find these same objects in space, see image above, like they've been ripped directly from the surface of a planet and tossed into eratic orbit.

And some of the non-carved and/or carved large stones on Earth do sometimes exhibit a rough or snapped-off area at one point on an otherwise smoothly spherical surface. indicating that they may have been once a double-lobe giant stone.
Email Post
Labels: electric universe