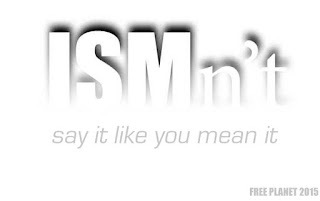 The idea of the ISMn't (new Free Planet campaign slogan) is to effectively eradicate the collective dogma suffix ~ISM from our language.

ISMn't, it's like ISN'T except that it's not; but what is it?

GET RID OF ALL THIS DICTATING CRAP~ism. We are not shapes to be fitted into limited moulds. We are all unique. We don't need this restrictive pigeonholeism. We The People are the ones who'll save this Free Planet from the corporate-corruption game and the war-world mentality in the name of immoral profiteering and intel-work via P3 or Protect Private Patents.

We are a planet of SEVEN BILLION INDIVIDUAL SOULS, not a restrictive set of spreadsheet cells or one or two pigeon hole options.