Geology, is mostly powered by sedimentary rock formation over billions of years, but... 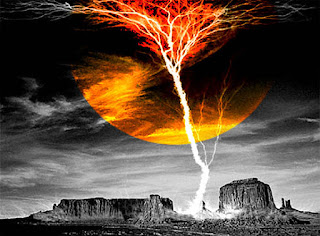 ...what if MOST OF THE ROCKS OF THE EARTH were formed (not by sedimentary but) by catastrophic processes over many times less than billions of years?

Catastrosedimentation is a word that combines the sedimentary and the catastrophic, because, right now, there's no proof either way that (short-term) catastrophy or (long-term) sedimentation is the cause of rocks and their serial layers.

Electric Universe researchers suggest that Venus, Mars and Earth used to be CLOSER and IN A STRAIGHT LINE within the life-giving plasma sheath of a foreign brown dwarf star. This invading star, trailing its planets behind it, would have electrically stabilised once it entered what we now call the Solar System, leaving the three planets in orbits around our Sun. Saturn was this proto-star...

Some say Early Man, some say Modern Man, carved these cataclysmic moments in rock art and royal monuments all over the world, catalogued the global changes taking place so dramatically all around them.

Such massive electrical plasma exchange between three electrically interacting planets would have caused major disasters, via major rock excavation and major flooding. And this may not have been a one-shot event if the brown dwarf star and its aligned planets grazed the Sol-ar System several times over a period of several thousands of years, getting inexorably closer and closer to terminal ionic entrapment.