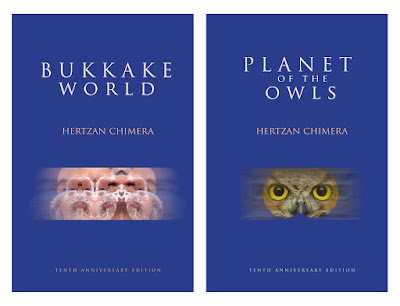 published in 2008 as trade paperbacks by Silverthought Press of N.Y., rights were returned to Chimericana Books a couple years after and re-editioned in new covers.

Bukkaworld:
a book about YOU, the corporate lackey, the indentured, the subordinate. Stuck in a job you cannot stomach, under a manager you want to annihilate, in a corporation that wants to grind you into nothing more than human grease to lubricate its inhuman profit-making machine.

Planet of the Owls:
Marcus (who works part-time at the falafel kiosk in town) awakens to find a giant black and white bird at his window. He's sure that's what he sees: a giant bird with feathers that throb with sinister portent.


2018, both books have been re-issued in 5" by 8" paperback with special TENTH ANNIVERSARY EDITION blue covers. Check out CreateSpace, Amazon and other online booksellers over the coming days and you'll see them there for sale. Go on, you know you're itching to...
Email Post
Labels: books