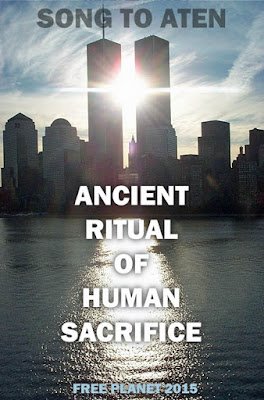 How do we solve 9/11 or the Atrocity of the 11th of September 2001 against the American People, in fact the People of the World?

We need to examine 9/11 in the manner of a Song to the self-styled Egyptian god Aten.

9/11 was the site of a GHS or Great Human Sacrifice, and that's the key to finding the culprits. Hell, even the planes, as they slammed into the WTC's 1 & 2 were IBCs or Inverted Black Crucifixions silhouetted against the Atenist morning sky. A New Dawn indeed. Don't forget the Sixteenth Card of the Tarot is the falling building, and it looks like Physics is being Defiled and Falling Man i.e. fall of man, may be more relevant to Building Seven which could be termed A MIRACLE of AUTO-DESTRUCTION.

In an ideal world, the re-investigation of 9/11 and Feature Film of the how and why of that insane-physics day will be called SONG TO ATEN or SPEARING THE 'G'.
Email Post
Labels: 9/11