The Holy Bible - the Serpent electric - Tree of Knowledge 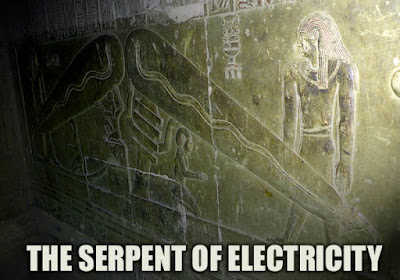 "Is Electricity (as depicted by the (Biblical-satanic) Serpent in the branches) the Real Danger in the Tree of Knowledge?" certainly if we consider this to be an Electric Universe, then knowledge of how to derive energy from seemingly dead materials would indeed be considered dangerous knowlege and potentially shrouded in secrecy.

Maybe the pre-Egyptian rose-granite statues and obelisks were sculpted or carved or created with this Electric-water technology?


LATER RESEARCH VIEWING: add this to the mix, the pre-Dynastic Ancient Giza Power Plant (which we know as the "Pyramids") by Christopher Dunn, said to be from thousands of years before the Egyptian Kings and Queens started carving their 'cartouches' onto ancient alabaster sculptures and placing their dead within the 'energy boxes' or so-called 'sarcophagi'.