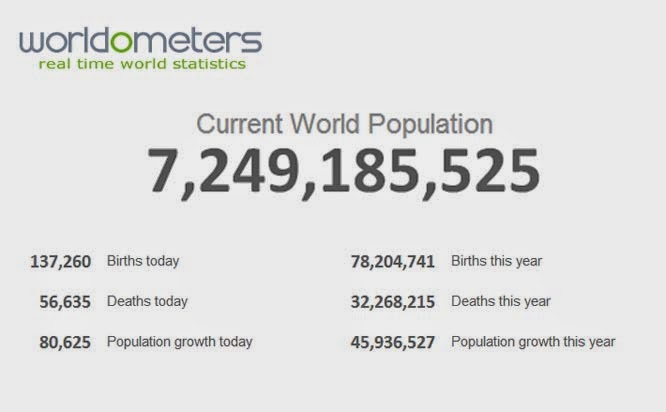 that is TODAY'S SNAPSHOT from the World Population Clock - we are now well over the seven billion living humans mark. This is a snapshot. Tomorrow, there'll be net 80,000 more. And the day after tomorrow another 80,000. This is taking into account those people who will die over those two days. How many more do we need?

I mean, even The (for profit) Industry'll have done the calculation, "What is the maximum number of workers a global bottomline structure can support?" and by this I mean, "Sure, you can have ten twenty thirty billion workers all working for free making cathedrals out of matchsticks," but what's the figure from the professionals? I bet there's a Maximum Number of Corporate Workers (before market saturation or infinitesimal profit kicks in), and I bet it was something like Five Billion. That'll be the great irony. That'll be why whole countries'worth of people are allowed to starve to death.

I completely don't understand humanity on this subject. That is just too many humans for the size of planet we are. The more of us there are, the less of anything else there can be. The most obvious result is WE'RE KILLING OUR FOOD or at least the ability of nature to bounce back -- fishing stocks are down, bird populations are down, bees are dying off. We'll be living in a land of weeds and fungal infection before too long. This is not some crazy Lemming-like or Expansionist or Attritional suicide race to the end.

Just do the right thing for Your Free Planet. Limit your families to one child. Do this off your own back, before One World Government does it for you (like they did in China). One child well brought up is all you need to reproduce the human species into the future. There are so many health benefits of Modern Living - and even more to come. We don't need historically large families filling up our world to the brim, spilling over into territory supposedly for 'other life forms' to inhabit.

"But Earth is a big girl, she can take it!" and that may well be. Projections for 2020-30 talk of 12, 15, 20 billion people, which the Earth CAN technically support. There'll even be those (religious!) among you who think it's their God-given right to 'go forth and multiply' forgetting that this was a Growing The Church policy rather than a growing the species dictat.

There's no benefit to having a big family. Sure you could whine and complain that "I enjoyed life more because I had brothers and sisters," no you didn't. Your life was a glorious/horrible as any single child's. Whether they're family or not, they're still all human with all the failings and advantages of that classification. We have to think of the other life forms we share this Free Planet with and how (and where) they're going to live. It's as much THEIR FREE PLANET as it is ours.

So, come on, quit rutting, let nature be, go ethical (technology-wise) and let's make this place the best place in the universe for intelligent people to co-exist with all their fellow creatures. Let's remake Paradise.
Email Post
Labels: free planet

Love To Push Those Buttons said…
Problem. What percentage of people are 'intelligent'? I'm with you, though. I got fixed as soon as I was insured and before I had sex. Hence I have none, but I can't stand the things, finding them annoying little worthless parasites, but hey! Works for me.
1:16 pm