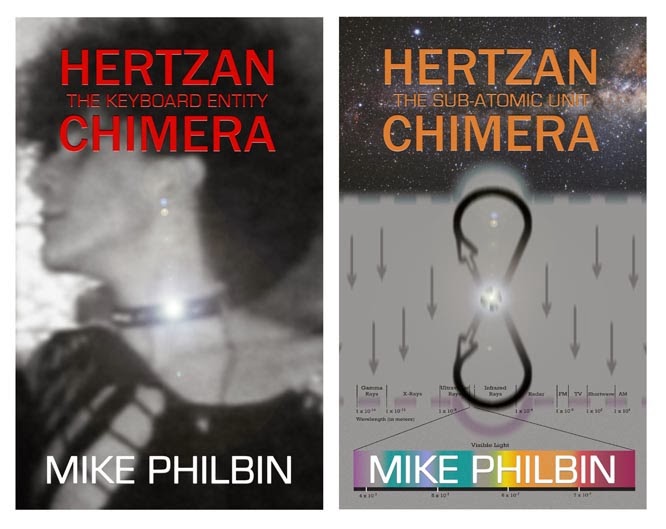 now, those who know me and/or know of the writing of this Free Planet blog KNOW with 100% accuracy that I am about the least psychic person writing on the internet right now. I don't have visions. I don't contact the dead. I have no spiritual convictions whatsoever.

Okay, I've described a couple of weird dreams I've had, but who hasn't had weird dreams, right? And remembered them, right? And maybe thought they were dreaming for a Galactic Race who couldn't, right?

Anyway, for the ten years of the 1990s (or maybe longer i.e. from earlier, like in the mid-80s) I'd been dreaming about this alternative physics particle called the Hertzan Chimera Unit. It was (back then) about the weight of a neutron and could produce positive and negative drag on this realm i.e. protons and electrons. I guessed that building chains of these HC Units swarmed around in active groups of three to form the atoms of reality. Recently, I've resolved this HC Unit into the up-down quark types that make those atomic constituents; the proton, neutron, electron.

This is all by the by, I then went on to use the keyboard name Hertzan Chimera to write a series of horror stories, collaborations and short novels. This 'writing persona' had a 'very special' personality type, too. And it got me into lots of online arguments. Who cares, but...

What if, what if, I was Channelling this Hertzan Chimera Entity from 'some other place' and writing down what it wanted me to write? Is this happening for ALL WRITERS, whether we like it or not, whether we want this kinda interference with our so-called Creativity or not; are all writers POSSESSED by the spirit of some invented-fraction version of 'themselves' when they sit at the keyboard and tap out 'what they believe to be' their own Creative Thoughts.

And this applies to artists, writers, poets, musicians, dancers, actors... are we all just Channellers, Puppeteered, Witch-doctored maybe even from off-world, or let's say, "From another dimension of death or space?" I know this is something that Jung called the Collective Unconscious, but he never specified whether this 'soup of psychic experience' was an Earth-bound state.

AMERICAN KABUKI said…
What if the separation of realms into different energy states also included a separation of being-ness into different realms and that humans, for one reason or another, have just been cut off from the greater reality of themselves which is hidden opaquely behind the concept of 'higher self'... what if there is no higher self just another "you"? Just sayin'.... Maybe its not a matter of possession, just info from yourself from somewhere else?
2:30 pm

Mike Philbin said…
'info from yourself from a higher dimension' can be directly interpreted as POSSESSION. But, you're right, it doesn't matter. It's just quibble and definition of what might be an off-world predatory Jungian mind-state.