having forced myself to rent out the film for £1 from the local library, I think I now understand (just a little more about) Ridley Scott's PROMETHEUS - as theatrically released.


No, wait a minute, then why re-write Earth when we have historical Engineer DNA in us, already? Unless it was their first time here, in which case why do we have Engineer DNA in us? Or maybe they updated the Engineer formula since 35,000 years ago when they first made us, so mankind didn't turn into such a war-mongering fuck of a race or whatever reason they decided to 'rinse and repeat'. And why are we not Blue Giants, like them? And why do all plants/animals on Earth not have Human-compatible DNA? And why does it take One Sacrificist to populate a whole planet, yet it needs ten thousand barrels of Snuff to 'cleanse a world' prior to the Sacrifist UFO's arrival?

And why did The Engineers not TRY HARDER to get here over the last 2,000 years. Surely they didn't have just the one military base with five Flying Croissant silos on it... I mean, that's not much of a Galactic Budget now is it?

Gah, I can't do it. I can't understand that Giger-less abomination of a film. Nobody can, it can't be done. 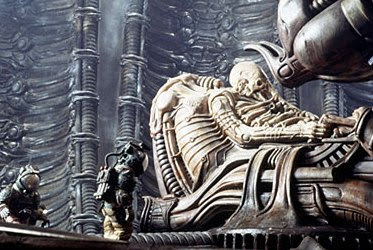 Potentially, millions of years ago, before Modern Man existed on planet Earth, the original Space Jockey was transporting humanoid cargo around the universe. Man meat being a universal delicacy. Space Trucker, as I like to call the Chair-welded Ganesha-beast, was 'just a bloke making a delivery for his boss'. The first thought that comes to mind is Noah's Ark, you know 'survival of a remnant'. I'm not even sure if, in this narrative, one of the humanoids should have made it to Earth and got it on in the Garden of Eden i.e. a primitive Earth, kinda pre-modern human.


Our story begins when Space Trucker cargo escapee "Adam" arrives on a diverse and abundant Planet Earth 35,000 years ago. He soon realises he needs more 'appendages' to enjoy the bestial feast dished up by God's Garden. 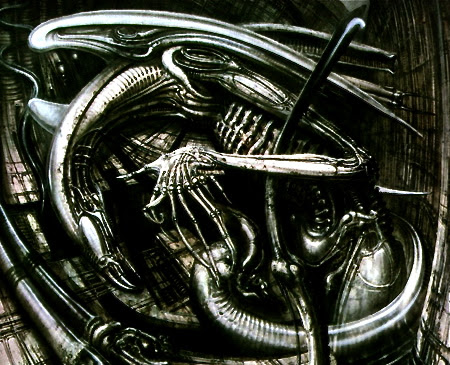 I think there'd have to be an opening scene that punctuates THE WHOLE OF THE GRINDHOUSE FILM with different variations of that above many-fingered moment when species after species MATE with Adam and his alien-DNA just pops them, kersplat, and then the next bullet in the Giger gun slips into the chamber, next species, next race, until finally the proto-man or ape-creature is 'blended with' giving birth to a belly-ripping Cuddles that splits and 'delivers' the first Modern Human baby.


In my version of the Alien Prequel Reboot aka Prometheus Reboot, there is a climactic 3mm descent SOFT-LANDING onto the stormy surface of LV-426 (following a final warp-space surge) where the original Alien begins. Space Trucker, at this point, having been shown as a whistleblowing HERO, successfully cloaks his egg cargo millions of parsecs distant from every known Space Trucker route.
Email Post
Labels: film