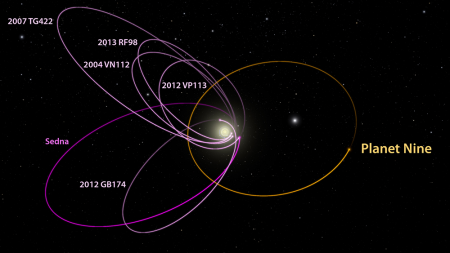 according to the latest computer simulations from CalTech, Planet Nine (from outer Solar System) is a) ten times the mass of Earth b) orbits 20X further out than Neptune and c) has an orbit upwards of 20,000 years.

"Although we were initially quite skeptical that this planet could exist, as we continued to investigate its orbit and what it would mean for the outer solar system, we become increasingly convinced that it is out there," says Batygin, an assistant professor of planetary science. "For the first time in over 150 years, there is solid evidence that the solar system's planetary census is incomplete." [source CALTECH]


What is meant by that is, "They haven't actually seen Planet Nine yet," it only exists as an element in a computer model... but they'll find it for sure, and when they do maybe they can tie in the eccentric orbit of this new Solar System inhabitant to what might have happened in 10,000 B.C. when the Younger Dryas (Kepier Belt nudged?) asteroid nearly wiped out the human race.

FREE PLANET EDITORIAL: I'm going to go out on a limb here, "If the current accretion model of star + solar system formation was turned on its head," what?

Well, think about it, currently, we're of the opinion that the outer elements of a newly-formed star disc cool off and become the planets and debris... but what if 'some other 'hugely more macroscopic'' galactic function causes stars to manifest amidst a cluster of debris. You know, the OTHER WAY ROUND. Then all star systems might be (literally) INFINITE IN THEIR PLANAR TERRITORY...

Gah, what do I know - comme d'habitude.


MAY 2016 REBUTTAL FROM THE ELECTRIC UNIVERSE: here's a (finally) alternative version of planetary capture and how to find Planet Nine from Wal Thornhill, he of the Electric Universe and Thunderbolts of the Gods... let's see if you're as discombobulated by this description as I was...