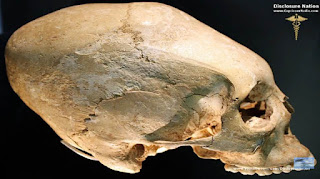 The more I look into Lost Cultures and Lost Peoples there appears to have been a group of Ancients who had access to high technology like Stone Melting, Polygonal Wall Building, Obsidian (and other delicate or super-hard material) Carving, Dolmens and Stone Circles etc. and were also obsessed with 'making their heads bigger' (well, bigger...) by this I mean Skull Binding.

Common to this era of Ancient History is the fauk-ELONGATED (or bound) SKULL, and the impression is that these Long Skull-ites are copying something that hints at different or earlier type of Human that no longer exists. These Extra-elongated skulls have been found all over the world (suggesting global transport and/or local-to-local trade-trending) sites that crop up includeTurkey and Peru, and also in Stonehenge.

Put the breaks on -- STONEHENGE?

Well, yes, according to archaeologist Maria Wheatley, the Neolithic Queen who was excavated from her own long barrow near Stonehenge had a Long Skull. But was this 'fashion' for Skull Elongation based on an earlier people who may have been 'doing the rounds' in a time when the Great Cataclysm had happened some time around the Younger Dryas aka 9,600 to 9,500 B.C.

Andrew Collins (whether I like his delivery or his conclusions is irrelevant) seems to pinpoint the Swiderians, a people from what's known today as Poland, who he claims to be HYBRIDS of Neanderthals and Modern Man. Tall, fair-haired, tall-faced 'magicians' who shared their intelligence and technology with the natives of Turkey and Peru and Briton...  the only down-side seems to be the Brits KILLED THEIR LONGSKULLS. As if the Brits lost faith in their Giant Snakeoilsalesmen and put them to the sword, destroying millions of years of learned knowledge and pushing the Britons back into the Dark Ages, literally.

So, what were the Druids and did they share Freemasonic tricks of the trade with a selected elite, in secret because anyone 'communing with the longskulls' would be killed?


FURTHER WATCHING: excuse the pun ... comes in the form of a presentation of SOFTENED STONE TECHNIQUE by Russian(?) youtuber New Earth. Now, I admit that her style of narration is a little bit like hard work but let's not throw the baby out with the bath water, let's listen to what's being said here about Ancient Technology (and we're talking pre-Stonehenge Dolmens and other architectural features here) that was used to SCULPT large stones into perfectly-fitting walls orsolid stone monuments. This kind of laser-engineered rock-work is found in Japan and Egypt and Puma Punku to name a few global locations.

At 16:29 in the following video, there's clear evidence of an embedded stone-within-a-stone that harks forward to the transmutative microwave work of John Hutchinson. What the hell is this 'softened stone technique' and why can we not do this kind of work today? Who can melt stone to soft-sculpt it? Lasers, ultrasonics, singing at the damn rock? Was this how this heavy-lifting soft-sculpting work was done?

AND HERE'S ANOTHER ONE: dealing with 'geo-polymers' i.e. concrete, and all other examples of polygonal stone walls from around the world.