Free Planet recently posted a piece about the Precession of the Stars across the Heavens as described by Walter Cruttenden in his LOST STAR OF MYTH AND TIME.

It has been noticed, and the Sothic cycle confirms, that Sirius does not move retrograde across the sky like other stars, a phenomenon widely known as the precession of the equinox. [source WIKI]


I've thought long and hard about this Sun-Sirius orbiting relationship and realised that, "Were Sun-Sirius to come within one hundred Astronomical Units of each other (as suggested by Walter vis-a-vis the rubbed-tight edge of each star's Kuiper Belt) then this would surely be cataclysmic for life on this planet."

Gravitational effects, asteroids loosed upon us, tidal imbalance, ice-age melt floods, seismic instability, cats and dogs living together... and the Younger Dryas saw mass extinctions on a scale not witnessed since the Death of th Dinosaurs. Furthermore, i.e. on top of all this doom and disaster, Precession is only 'regular' in the last 5,000 years or so - as shown by the following illustration. 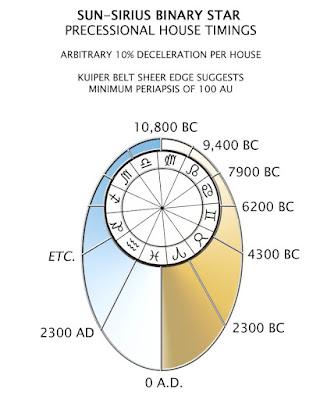 Go back further in time, towards the cataclysmic Younger Dryas event/period (approx 10,500 BC to 9,500 BC) where the Last Ice Age saw an abrupt change in Earth's climate rising the seas and plunging the sky into darkness for a thousand years, and you'll find that the houses of the Zodiac are sped through faster and faster. I've been very generous with my timings and my accelerations, offering the Christ-relevant current house a transit or Precession time of 2,300 years and taking 10% off for each house traversed back towards the start of the cycle i.e. orbital periapsis. The ellipse is obviously the path of the sun over time, direction of travel is clockwise. Yes, I have flipped the central Zodiac because Precession goes backwards through the twelve houses.
Email Post
Labels: ancient ancestors science