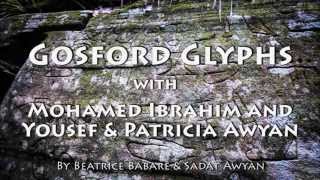 Mike, what kind of crazy shit is this, "The Gosford Glyphs?" you're telling me these supposed hieroglyphics about two brothers of an early Pharoah are not some fakes crudely carved by some Australian Uni-kids out on a beer bender in the Aussie Outback?

Well, when you compare them to the Standard Glyph Lists used by Ancient Egyptian Writing Experts, Interpreters and Academics, there's a lot that appears to be wrong with them - unknown shapes, shapes facing the wrong way, UFOs.... blah blah blah. As mentioned in an earlier post about Steve and Evan Strong, this is attested by the Elders of the Ab-Original people of Australian who helped discover them and share their reality with the world.

What's going on here seems to be that the Gosford Glyphs pre-date the usual Dynastic Egyptian hieroglyphics by a couple thousand years, stretching right back to 3,500 BC or earlier ... and here's the biggee, "They were found on facing sheer cliff faces in the Australian Outback." The researchers of this glyph text are the famous Egyptian tourist guides and Egyptian scholars Mohamed Ibrahim and Yousef Awyan, presented by Patricia Awyan.


...and did you notice the 'pharoah boomerangs' (originally exhibited in the old Cairo Museum) shown at the end of video3? Steve and Evan Strong do go on about the Ab-Originals being the original voyagers of the sea and the trade would have gone 'that way' to Egypt, not necessarily 'this way' to Australia ... but it's all about the Cultural Connection. Thousands of years before archaeology says such happened.
Email Post
Labels: ancient ancestors