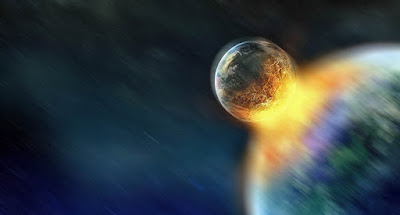 My basic premise here is so-called Hunter Gatherers didn't simply evolve into Farming Cities, but the 'hunter gatherer lifestyle' was the result of dispersal of cataclysm-ruined city peoples. This means Great Societies have come and gone, ALL THROUGH MODERN MAN'S HISTORY and there is nothing we've ever been able to do about it. You can read it in your 'holy books' time and time again, an exodus of people isn't always a political event...

People BECOME hunter-gatherers (periodically) when Nature allows it by clearing a landmass of cities, and this happens all the time. If that part of the world hadn't been 'cleansed' beforehand, the hunter-gatherers would never have had the (new) territory to move into. Such as the 500 AD western Britonic sky-attack that cleared the England for the Anglo-Saxon peoples to migrate from the east and southeast to the centre and south of Briton without much worthwhile human resistance.

We can see this by looking at the European genetic predomination of redhair and pale skin on the Atlantic coast or the Baltic area exclusively. THERE'S A MASSIVE GENETIC HOLE in the ancient data (concerning the migrations of 6000 BC) centred around modern Germany suggesting that Europe was CLEARED for the non-gingers and non-blue eyed's to move in... etc.