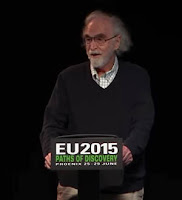 Gerald Pollock recently did a presentation (at the Electric Universe 2015 conference) on how the Earth's atmosphere is rsponsible for the spin of hte Earth...

Now, you might think Pollock has gone mental suggesting that 'the atmosphere is the driving mechanism for both the Earth's spin and its electromagnetism.

Gerald Pollock here suggests that the wind 'that turns the Earth' comes from charge gradients that the sun sets up in the Earth's atmosphere. Not only is the charge force more powerful than gravity (by a factor of 10^38) but Pollock's presentation is both compelling and powerful.


Now, I'm sure you're thinking, "Do any non-atmosphere planets still rotate after five billion years since 'the sun formed them'?" if you're not thinking, you're wasting your time watching shit like this all f***ing day long. Right?

Pollock says it himself, THE EARTH'S SPIN ISN'T CONSTANT. It goes up and down. How? Any object that's spinning in a vaccuum will smoothly lose energy over time and will spin slower and slower - it's just the way Physics is.
Email Post
Labels: science