Gobekli Tepe - Temple or Council - Diplomatic (rather than religious) Origin 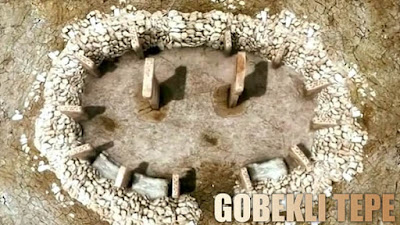 Free Planet is not a fan of leveraging contemporary GODMA onto the meeting spaces of our Ancient Ancestors.

The GIANT twin-pillar representations at the centres of places like Gobekli Tepe (in Turkey) and Stonehenge (in Britain) while seemingly-symbolically Freemasonic in origin might merely reflect the sharing of responsibility between The Male and The Female. They might also show the scale of the GIANT RULERS to their subjects or gathered tribal leaders. These sites of 'worship', time-marked by the procession of the zodiacal calendar, were more likely to be tribal-meeting arenas at the crossroads of territories held by neighbouring tribes - a place where diplomacy between potentially-warring factions could be exercised.

For what is a Temple (or Mosque (or Church) or any Sacred Place) but a location where negotiation with the Eternal can take place a) publicly and b) internally, and interpretations of the Fates can take place?

"I think what God meant to say was this..." for ludicrous egocentric example.


EDITORIAL COMMENT: while the above video focuses on what-we-today-call 'gods' and 'religions' and 'the building of ceremonial stone circles to honour such' to support the documentary producer's mystical thesis, this is forgivable in the sense that in terms of Artistic Exploration of the Evidence. The introduction of The (Indian) Vedas into the debate is a special moment in the interpretation of these super-ancient monuments. This is clearly the best documentary to date on (the twenty temples of) Gobekli Tepe... whatever it was.

Another concept this video considers is that 'the gods' weren't g.o.d.s. as such but were just a Special Family of Giant Humans who were experts in Out Of The Box Thinking aka Snake-oil Salesmen or Magicians or Con-artists explored in a recent Free Planet post WHAT IF THE NEPHILIM WEREN'T GODS.

Please activate Subtitles on the above video as key interviews are in Anatolian.


FURTHER VIEWING: related you might think this is or not, here's a report about the Smithsonian DESTROYING thousands of skulls of 7ft to 12ft Human Giants from 10,000 BC that were discovered in the eastern United States, most notably Ohio. The following interview tells of GIANTS IN AMERICA and MATERIALS TECHNOLOGY and STONE TEMPLES and MOUNDS and the THINGS THE DRUIDS were sharing by word-of-mouth with their Initiates in Scotland, Wales and Ireland.