it's been a while since I thought about the pseudo-science sub-atomic particle the HC (or Hertzan Chimera) Unit. The HC Unit cycles sinusoidally between Universal Equilibrium IN, CCW out, Universal Equilibrium IN, CW out... i.e. + 0 - 0 + 0 - 0 + 0 - 0 etc. Always the same cycle. HC Units link up in an unbroken looping chain to make atoms like this for HC12 +0-0+0-0+0-0.

HC Units in atoms therefore acts as both a nuclear proton AND a nuclear neutron, the 'electron' being a result of the interactions of these cycling HC Units in the circular chain. Three HC Units (tritium) together in this format +0- or 0+0 or -0+ or 0-0 are the (open ended) building blocks of all higher atoms. Two HC Units (deuterium) under inner-stellar conditions make up the atomic elements in this format +0 0+ -0 0-. Two deuteriums together make Helium... HC4 is a no net charge i.e. self-feeding HC Unit chain.

I wonder if there are any mathematicians out there who can shed some light on the relevancy of this geometric discovery. Me, I found it, but I don't really know why it works, and continues to work for the elements between He and Ne, maybe I'm just forcing it to work, you know, in my mind.

So, for a laugh, I thought, "Solid geometry," and it seems to work in these two cases...


I'm now wondering if I can blag my way from HC4 (Helium, tetrahedral duo-deuterium) to the HC20 (Neon, dodecahedron) by adding these HC2 (deuteriums) to each point to face-triangulate the HC4 then do it again to face-pentagonal tetrahedron. Helium (HC4) is two sets of self-feeding deuteriums. Lithium (HC6) is two sets of HC3. Beryllium (HC8) is two sets of HC3 plus a single HC2. Here's the rest of my scribbled list:


MORNING AFTER UPDATE: and here's my before-bed scribbled solution to the "Turning a tetrahedron into a dodecahedron in stages by adding a deuterium to each point of the tetrahedron in series," and it seems to get me there... 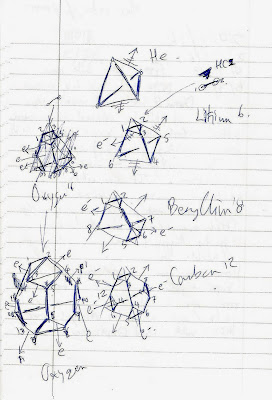 You can see (I hope) how the two stable first shell electons from the Helium are retained throughout the subsequent atoms, and also notice how each valence electron is present (in the gap between the newly introduced triangle per tetrahedral point). The transition from face-triangle to face-pentagon was a bit of a head-f**f but I think it'll work by zig-zagging the HC-chain path across the face of the pentagon per triangled tetrahedral point.