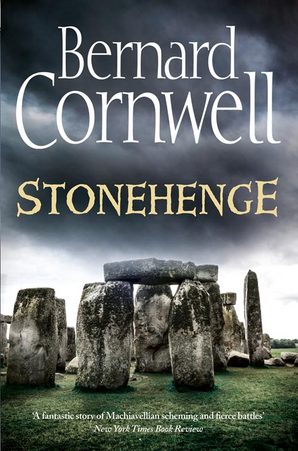 Cornwell's book is about Shaman-ISM i.e. the ritualistic exhaltation of the cripple, the half-breed, the outsider. It could be termed, "An Architectural Prequel," it being the (fictional) story of how a 'place' was built.

Notice I didn't say monument or temple or church, because I'm not totally convinced that Stonehenge had anything (at all) to do with 'religion' or 'spirit' or 'the collective soul of the stonehenge architects'. I specifically enjoyed the four-stages of construction or the sketches of the set, for the great theatre of life this book plays with. For 'all the world's  a stage and we are but actors in a production or programme'.

Seriously, let's move on from this already. Cornwell (whom I've never read before) does a really good job of constructing a plausible narrative for the building, over various phases, of the Stonehenge monument. It's meaty-good fun and easy to raed. Not that it's either historically, or archaeologically, or religiously, accurate; that's not what matters. It's a pot pourri fictional work having a stab at proposing an idea about a mysterious place, and what's that idea?

TRIBES, obviously, and the Co-opting by War of Common Land i.e. this Free Planet. It's a story of Inheritance. A story laid out as a Domestic Drama where brothers fight and women are just targets for lust.Stonehenge wasn't even EVER its name. Druidism comes from the 18th century. There is no mention of Celts in Cornwell's Stonehenge novel. It's all just island tribes: sea-farers, and we don't even know where they came from, apart from the Amesbury Archer who was Swiss. Oh, and the Phoenecians, maybe? Trojans? Atlanteans?

There are 'gods' in the book, but they're your common-or-garden local-named shamanistic i.e. drug-fuelled, varieties of the same celestial, mountain, streams, entities, pixies... like the Earth was always 'haunted' i.e. filled with inexplicable i.e. physics-like, effects. A centaur-darkened winter-landscape weighed down with fungus, mushrooms and ketamine. A 'holy world' of fear-trumps-sense. Seriously, man is a tool for Godly Conspiracy. It's what he's ALWAYS been, the victim he's always aspired towards.
Email Post
Labels: books