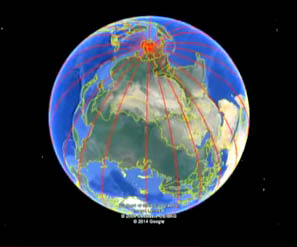 "Take the lines out of Nazca and extend them all around the Earth and they all converge at Angkor Wat in Cambodia," says L.A. Chuck, the creator of the following (mind-blowing) youtube video linked to Graham Hancock's global catastrophe of 12,500 years ago, you know Noah's floods and all that asteroid shrapnel hitting ice-age North America and Western Europe and wiping out nearly all indigenous species in its path, and the Clovis people, for example.

Okay, okay, we all know that (certainly on such a global scale) geographical coincidences happen and one can draw any old line around the Earth and catch relevant historical monuments but, even taking all that into account and no matter where you draw this fak-e-quator, FIFTY ONE DEGREES is (still) the exact slope-angle of the Giza Pyramids. More UK-fleeing conehead-giant Nephilim mathematics in effect...


ADDITIONAL NAZCA-LINEage: here's the first of L.A. Chuck's 'possible solution' to the Nazca Lines that is the basis for the previous video about Earth's Ancient Antediluvian Equator which he achieves by simply extending one of the Nazca Lines out around the globe, along what might have been the Ancient Equator and Ancient Poles.


SUPPLEMENTAL GIZA-FOCUSSED PYRAMID FOOTAGE: here's a 'secrets of the pyramids' video from 2010 (made by the French and narrated by Brian Cox) that actually addresses many of the technology-questions that 'modern day astro-archeologists' are re-asking: Questions about the science or machines that made these unbelievable structures and their carved faces and contents. How did they achieve such a level of geometrical accuracy and stellar alignment? Free Planet is a bit irked by the 'political shoe-horning' of Al Gore's Global Warming or Carbon Tax Message at the end of the vidoe but particularly likes how the eight faces of the Giza Pyramid are only revealed on the Solstices, that's TWICE A YEAR only, because the Giza pyramid is EIGHT SIDED, not four.

L.A. Chuck has the map Cuzco-centred, this video goes into Giza-centredness... but they're both valid as they're both on the same Olde Equator, thirty degrees off today's true.