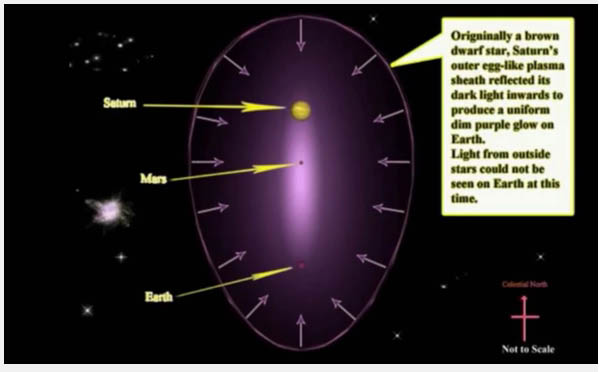 so, I'm looking at all-other-kindsa Saturn-based or Saturnalia or Set-god videos. I know, I know, this is a massive dirty filthy steaming crock of shit-storminess, right ... then I found this Purple Dawn video from youtuber Odin Rising about man's origins close to the planet of Saturn, actually within its glowing plasma sheath; Saturn began its life as a brown dwarf star.

This theory of the amalgamating-formation of the (current) Solar System via competing plasma ejections is mad and wild and crazy and maybe that's one reason why I'd never heard of it before. But it's (il-logically) got legs; it's fascinating. And we're probably an underwater (or near-water (or aquatic)) race, allegedly. We're more related to dolphins than we are to monkeys, according to this production.

Summary: twenty-three degrees, that's the shared tilt of the four related planets that ventured into the original Solar System; Earth, Mars, Saturn and Neptune... oh, and all of this happened only 50-70,000 years ago. But maybe this is the reason why ancient history and legend relates the story of A VERY DIFFERENT SKY... a more electric perma-twilight, in an Electric Universe.

EVENING UPDATE: this supplemental video from the amazing Lunar-wave-ist Crrow777 deals with 'when Venus dominated the sky, before Earth had a moon' so (rather than some romantic interstellar collision that happened millions of years ago) what's the REAL TIMESCALE for the arrival of our planet's first satellite?