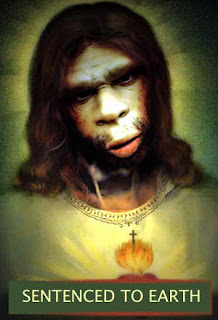 Religion is convinced, "Man clearly made in God's image."

Neither need be right, but get this straight in your mind, "Ice cores show that there may have been FIVE AGES OF MODERN MAN in the last 500,000 years."

Not one i.e. the world-famous Mitochondrial Eve, otherwise known as the Out Of Africa theory, but many species of Modern Human.

All over the world, at different epochs, in different times...

What we see now as Homo Sapiens is just the most recent of the Five Waves of Modern Man, those that came 'after' the Last Great Ice Age. But surely other variants must have come before... We just need to dig deeper to find these missing species of human convict.

Remember, the British Empire used to exile their criminals in penal colonies like Australia, shipping their unwanted to slave labour camps in far-flung foreign lands or corporate owned countries won by war or called 'discoveries'. Russia did it with their intellectuals, dumping them in the frozen wastes of Siberia. Maybe a race of Space Humans from a Neighbouring planetary system or star banish their criminals, their dissidents, their great thinkers to this planet on a regular basis, strip them of all scientific knowledge and see how they fare; how their brains rediscover...

How many times has Humanity ruined its one chance at survival with greed and possession and power?

OF COURSE: a less controversial theory to this Exiled (sentenced to Earth) Human is, "Subsequent Tribes of Man grew beyond their locality's ability to support their number and invaded foreign lands by land or sea, killing their competitors for assets like food, water and shelter."

Five waves of Darwinistic Modern Man killed their brother to survive on such a limited resource as our Free Planet. Kinda sad, really.