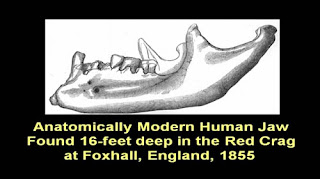 there's a Darwinian evolutionary model that modern humans came into being about 100,000 years ago (eventually leading to the Homo Sapiens variant that we are today) and it's what we're taught in our non-Creationist schools and colleges.

And while Free Planet doesn't entirely agree with Michael Cremo's vedic assertion that 'humans are consciousness that interacts with matter' and may have been flying around in mind-controlled nuclear spaceships for millennia or aeons, there are a lot of cases of archaeologists unearthing modern human bones, footprints and artefacts from way further back than a Darwinian model suggests. Cremo should be applauded for at least bringing such secreted away evidence to public attention.

Potentially, the way geologists assess layers of sediment and rock formation is WRONG and there's a much more dunamic method involving meteor tsunamis.